The 3 day, “three peaks (the lazy way)”, adventure continues in this video, which shows the lengths (and heights!) I go to, to try and visit all three of the Blue Mountains 3 peaks, in the easiest route possible.

Day 2 had a fairly lazy start with Jim’s excellent catch for breakfast and some downstream meanderings to investigate long-ago rumours of an excellent campsite not too far from where we were. However, those long-ago rumours were just that… maybe long-ago it was a great spot. Now?… not so great. That is, unless you’re a wombat with a penchant for metre high bracken ferns.

The highlight of the day (and possibly the trip) was visiting the plaques that pay tribute to the Carlon Family patriarchs, as seen in The Man From Coxs River documentary. (Oh, BTW they’ve now launched the DVD – get in quick!)

I wasn’t sure what to expect, but if you’ve read my earlier post on the movie, you probably won’t be surprised to hear that I found it quite profound and moving, as did many of my fellow walkers. We lingered briefly and removed some of the weeds from around the plaques, before turning to head off for the day.

The day’s journey was very much in a yo-yo style of hiking and although only around 6km in distance (easy, right?), we needed to climb 1000m to Mt Paralyser and then 1000m down the other side, back to Kanangra Creek. Sigh. Really? Is this fun? Absolutely!

We did our duty and left our mark in the logbook on Mt Paralyser and then headed off, down, down, down, along the jagged, sharp, knife edges that led us back to Kanangra Creek once again, each one a potential ankle twist waiting to happen.

Our evening entertainment started early when we were setting up at our 2 star campsite and found that the neighbourhood was crowded by our unnamed (Brown?) Mr Snakey. Hmmm, must have been something about me accidentally treading on him that made him angry. Humph… can’t imagine why! Happy to be wearing my gaiters at that point, he made a nice show of welcoming us by standing up and smiling at us. Not to be a gate-crasher or anything, I went in search of another option, only to return 10 mins later with no luck. Just as well the neighbour had decided to move on and go for a swim.

I decided to try something a bit different for a dessert treat tonight and had brought along a banana, some foil and 70% Lindt dark chocolate. Let’s just say, it’s not pretty… but it was delicious! I thoroughly recommend giving it a try! Definitely need to eat it with a spoon as it was all mushy and fabulous.

For what I had in store for everyone tomorrow morning (Ahem, leaving camp at 0515hrs), we needed all the energy we could get!

Published on December 2, 2014 in Adventures 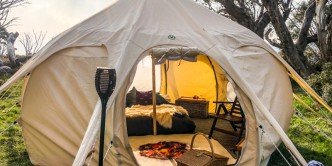 Things to do in Falls Creek in Summer