The blade cut into the glass of the lake, creating only wake behind us. Gentle, geometric ripples ran out, uninterrupted to the shore, whilst our eager faces acted as figureheads, pushing into a breeze that only we created.

Moving forward, the heavy silence was broken by unfamiliar sounds. A high pitched natural jackhammer, startled me. Eyebrows raised, my figurehead spun around to the guide.

I turn back to silence and the rhythm of the paddle pulling us across towards the island.

I haven’t been in a canoe since primary school, when games of ‘Pirates’ on school camp, were more about stealing people from other boats, than stealing away to silence. More about scoring points, than scoring a great campsite under the spruce, cypress and maple trees.

I feel eyes drilling into my back and it’s not of my guide. Around the shore line, graceful deer watch us gliding along, as they’ve done for centuries. They’re safe tonight from a hunter’s sights, even though they’re not alone. With the eyes of a calm watcher, I can make out the hides nuzzled down amongst the pines. These shelters however, are not designed to hide weapons of the hunt, but hide Canadians from the stressors of life. Another long held tradition of North American life, the Lake House.

In New Zealand they’re a bach or a crib; to Aussies the beach house is a long held sand-stuck-in-the-cossie childhood memory; but out here in the Canadian Provinces, the Lake House retains the scent of winters burning through the precious deposits from the wood bank. But rather than retreating into hibernation, snowshoeing, skiing and sledding, alongside summers of jetty jumping, paddling, mountain biking and hiking, mark these as active escapes.

With arms more used to sea kayaking and the easy, swaying balance that two blades brings, my shoulders are starting to ache as I finally get the hang of the single paddle not scraping the side. But I’m comforted in the knowledge that I’m moving forward in an ancient way, via a form that runs deep within the veins of Canadians. If football, meat pies, kangaroos and Holden cars was translated to Canuk, it would be, ‘hockey, poutine, deer and canoes.’

If the humble canoe ties Canadians together in a traditional way, then the route that I’m taking joins them across 24,000 kms. It’s a thru-hike like no other and is known as The Great Trail.

On presentation, the concept of being able to create a single trail, to link Canada from coast to coast, to coast; linking the three oceans of The Pacific, The Atlantic and the Beaufort (Arctic), seems not only an impossible dream, but an improbable reality.

The sheer vastness of the trail begs the question if anyone has actually completed the full length. That honour goes to 24 year old Sarah Jackson. Inspired by her Uncle’s journey on the Camino de Santiago, she took two years to complete the challenge.

Her journey is testament to the growing interest all around the world for long, pilgrimage style journeys. “Knowing you only have to put one foot in front of the other really puts things into perspective,” says Sarah.

Apart from traversing landforms as wild and dramatic as Canada can throw at us (The Rocky Mountains, The 1,660 km long MacKenzie River, the windswept prairies of Manitoba, remote outposts of Saskatchewan, countless lakes and waterways of Ontario, urban landscapes and cities, backcountry ski and snowmobile routes and along the best rail-trails the country has to offer), it’s the immense trail of planning, permissions, partnerships, politics and determination that have seen this 1992 dream, finally become a reality in 2017.

Given the task of creating events to celebrate Canada’s 125th Anniversary in 1992, Bill Pratt and Pierre Cameaux, sparked an idea that would take the next 25 years to realise and instead, celebrate the country’s 150th. Their idea was to stitch together the patchwork of existing hiking trails, bike trails and canoe routes to rediscover Canada at a slow pace, in one continuous route. It was designed to be a campaign that all Canadians could get behind.

“The idea was captivating in the heart of Canadians,” enthuses Caleigh Christie, from the South Whiteshell Trail Association. “As soon as we heard about it, we took the ball and ran with it. Across the country, there were pockets of people like me and my Mum and other people in our community who said, ‘Yeah! We want to be a part of this project’.”

“I love trails. I love hiking them, I love biking them. So to be a part of a Trail Association and be involved with building and promoting them, it feels natural.”

From Caleigh’s remote outpost in southeast Manitoba, where she runs her family’s tiny ski slopes and lake cabins on Falcon Lake, she was able to be a part of something that connected not only the trails of Canada, but connected her to other volunteers just like her all across the country.

“Ultimately, it was built by all those small communities, connecting the dots, all across the country. That’s what made it what it is today.”

If you need any insight into understanding how Canada have achieved this epic feat, you need to understand who they are.

The common take away from spending time in the land of the maple leaf, is that Canadians are nice. Really nice. In many ways, some not so great (like our treatment of First Nations Peoples), there are many similarities between Australians and Canadians that have nothing to do with the Queen.

As local after local smothers me in nice, I start to wonder if it has something to do with what they see out their windows. From the unwordable Rockies to the west, jagged and dramatic knives of rocks, pushing skyward, to the bedrock of hiking and climbing adventures, pointing to the Yukon in the north.

Or to sweep east across the prairies, to big sky country – the heart of Canada – where the harsh seasonal contrasts in temperature from 26c in summer to -20c in winter melt and form the landscape and the people. There’s a resilience and humour born of constant change and a humility and strength from living subject to the seasons.

Geographically expansive, we share a diversity of landscape, vast tracts of seemingly uninhabitable land and a colourful colonial history with it’s ups and downs. Yet it’s who we are as people – our qualities – sense of humour, adaptability, volunteer and community spirit and our ‘no worries’ mentality, that is the key standout.

Without these qualities, I don’t believe The Great Trail (Le Grand Sentier) would be what it is today.

In many ways, it’s a trail of the people.

Caleigh continues, “You really get to know a place by walking on the trails there. Meeting people in the towns as you walk through, that’s really what connects people.”

The sheer genius of the not-for-profit organisation behind it (The Trans-Canada Trail Association) is that it has facilitated 477 volunteer community trail organisations (like the one Caleigh belongs to), to embrace the big vision of joining their separate networks together.

Although receiving generous funding from both the Canadian government, sponsors and private donors, The Trail doesn’t rely on government organisations or parks authorities to do the work. It is a grass-roots inspired cooperative of individuals, passionate about helping people connect with nature and the outdoors in their own local area.

“There are so many skillsets that make it flourish. Some people in our group really focus on the building aspect and want to physically pick up the dirt and move it around actually making the trail, and others are focussed on connecting with the audience and promoting it and for others it’s the admin, which is huge.”

In building The Great Trail, they’ve not only created a way to traverse Canada, learning about its history, geography, politics and First Nations Peoples, but they’ve created community. A community as diverse as the means for travelling through it.

And whilst today, I find myself paddling across a section of the Whiteshell Provincial Park by canoe, in a few days time I will be cycling the section of The Trail on Prince Edward Island (PEI), called The Confederation Trail. No longer contained within a boat, the wind will once again be in my face as I pedal (not paddle) along the bed of the former Prince Edward Island railway and the first section of The Great Trail project to be completed.
With the extreme contrast of seasons in Canada, timing is paramount. Although a t-shirt in August is a perfect choice, this section of the Trail is handed over to the sole domain of snowmobiles in winter. The low-lying and relatively flat terrain of PEI also makes this section of the trail ideal for wheelchairs and others with mobility issues.

As the southern hemisphere is flying headlong into summer, spare a thought for Melanie Vogel, a 42 year old German woman, who is currently attempting the full trail. She kicked off from Newfoundland in May 2017 and isn’t planning on finishing at Vancouver Island until 2019. Not a traditional hiker, just a lover of travel and all the experiences that brings, she says, “I just wanted to be. To take my love for the road to the next level. I feel a lot of people have disconnected from nature and I want to encourage them to get outdoors.”

As I crane my neck to enquire again about an unfamiliar song, reverberating across the water, my guide responds, “Lune”.

I return to the gentle, nudging rhythm of paddle and canoe and for a moment, I imagine pulling myself across Canada, held within the Great Trail’s embrace.

Fast facts about The Great Trail

Published on May 22, 2018 in Adventures, Hiking the World 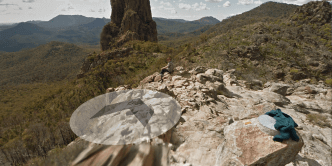